I’m currently implementing a new widget for Kitsu, the production management tool of the CGWire suite. It was asked by Les Fées Spéciales. They need it to know easily the shots concerned by a change on an asset. It could be used too to make their scene building easier.

From conversations with Les Fées and on the CGWire Slack channel, I built a first version of the widget. I would be glad to know what you think about it. 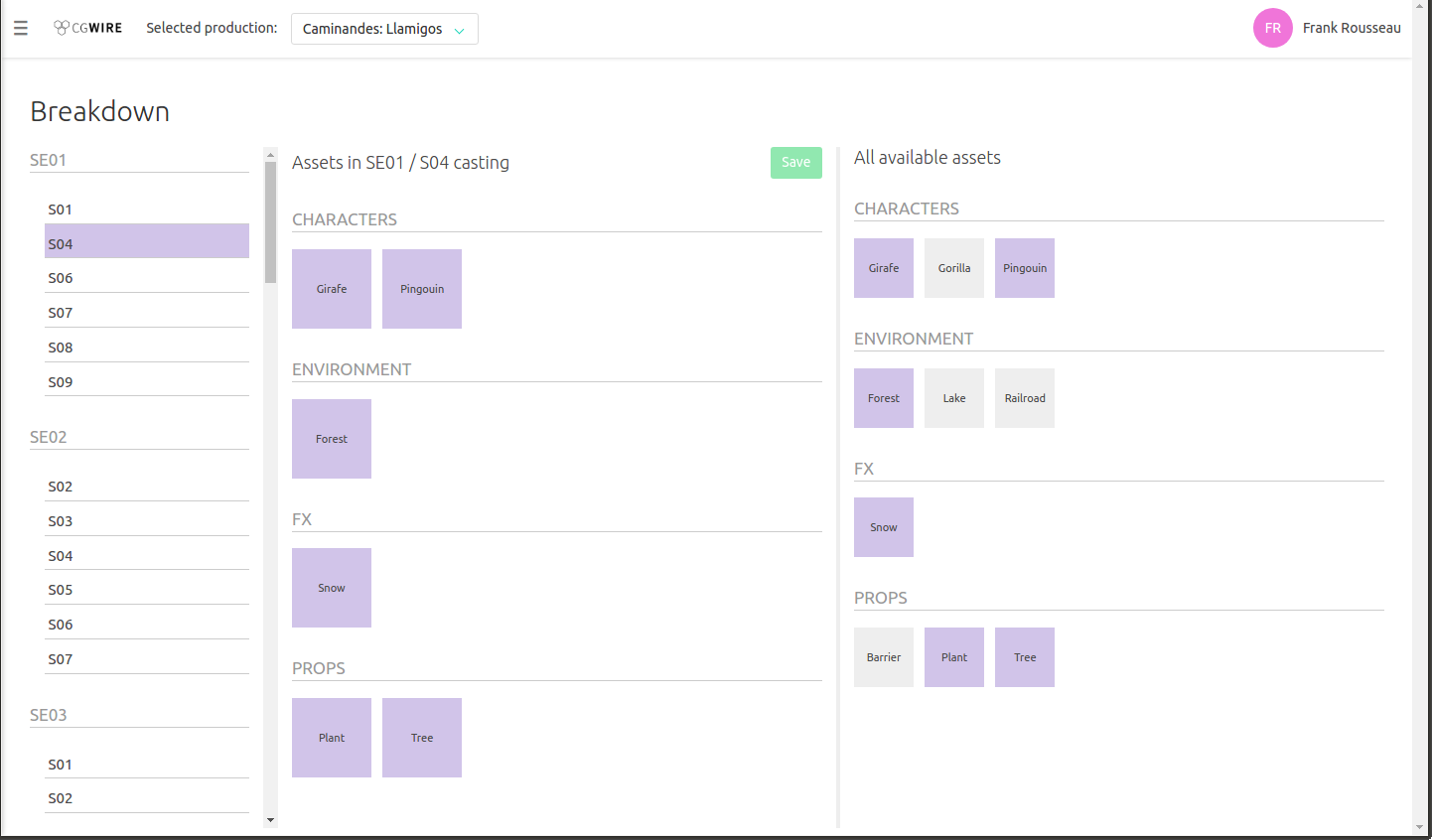 One thing I would like to add is the number of instances for each asset appear in the shot.

What do you think about it? Is there something missing? Do you think the UX is right? It would be awesome to have your point of view!

That’s a very good widget. Currently something lacking in Ftrack.

How does the user assign assets to a shot? Drag’n’drop?

Thank you @tokejepsen for the feedback. A simple click on the right add an asset to the casting and a click on the middle remove it. The next step is to divide the asset on the right in two parts: one for +1 and one for +10. It will allow to manage the number of instances quickly.

Hi all. I made some improvements. I added a video gif to illustrate it. As you can see it’s now possible to set the number of occurences inside the casting. I added a quicksearch too (@flavio requested it :))

Oh wow, this is fantastic!

What are your thoughts on giving assets icons or thumbnails?

Hi
The UI looks good IMHO.
However, is it capable to handle big amount of assets.
In my current production, we manage over 1000 assets and it’s hard to imagine this ui handling such quantity.
I think having a way to import csv file could be useful. I will post an csv “casting” example soon.
Maybe having a kind of cell where the user begin to type a name and the completion do the rest, like the asset/shot cell in shotgun…

Will it be possible to connect asset to every entity ? Such as episode, shot, other asset ?
Another thing. If assets are connected to shot, it could be useful to have a page which display how many times assets are used in the episode. Globally, parent entities doing a summary of usages of assets in children could be very useful.

That would be great! It’s on my roadmap, I hope to handle this in upcoming month.

Thank you @manu for your feedback.

About managing breakdown for 1000 assets, I don’t know how it would behave. It may become messy. But there is a quick search field that could help. I have to try it. I will see too if I can find an easy way to import a casting from another shot. I’m not convinced by the Shotgun UI, so I will look for better ways to do things before doing like in Shotgun.

About linking assets to every entity, it’s not a requirement that was asked to me. So I didn’t implement it. But, in some way, Iinking an asset to a shot automatically link it with an episode or a sequence (they are parents of the shot).

Having statistics would be good, but it’s out of scope for now, so I won’t implement it.

Thanks for your answer @frank !
I’m not convinced by the shotgun ui either but it could be a first solution before finding a better way to handle this.

Ok for the statistics, i get it.

Wondering if the following resonates:

Across a sequence of shots there are three instances of the same character. Continuity requires maintaining coherence across the three shots (“characterA is the one that has 20% more hair”)

In this case we want to make sure that the instance name is the same across the three shots: render elements are named the same, Maya namespace is the same etc.

This avoids downstream confusion “characterA needs the special comp treatment in this shot but it’s called characterB in that shot.”

It’s basically begging for the production management tool to act as a registry for this.

The instances of ‘character’ start out in bidding as though they were almost a ‘crowd’, perhaps introduced as “a handful of them into the midground.”

As work progresses we see “narrative identities” emerge: individual instances begin to require tracking as though they were ‘heros.’

The degree to which one measures an instance’s anonymity is a sliding scale and changes dynamically.

Thank you for your feedback! What you describe look similar to the notion of role described by Douglas from Blur on the Slack channel. Narann from Studio Hari talk about instance of an asset and thinks that an entry in the database is required for each instance.

If I mix your feedback with previous ones, next steps of the breakdown page could be: